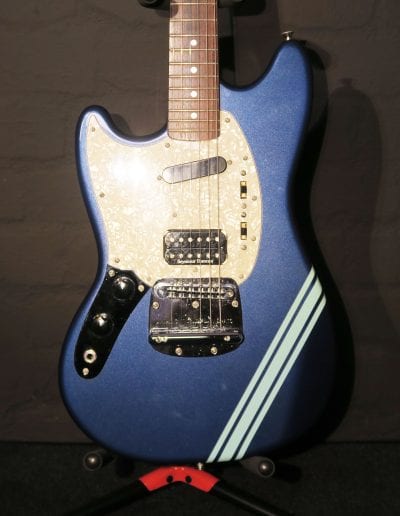 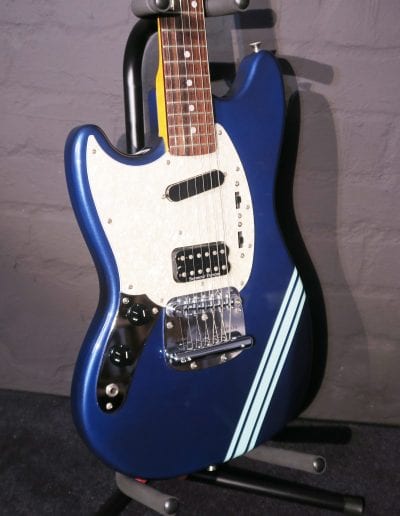 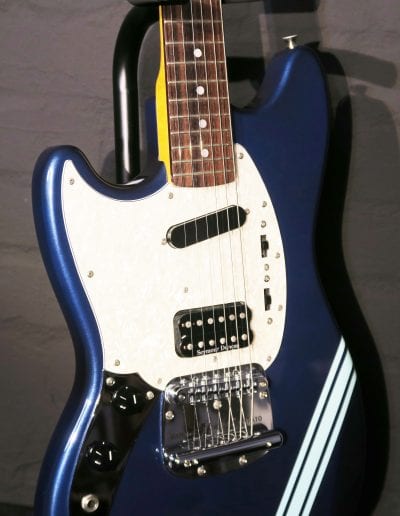 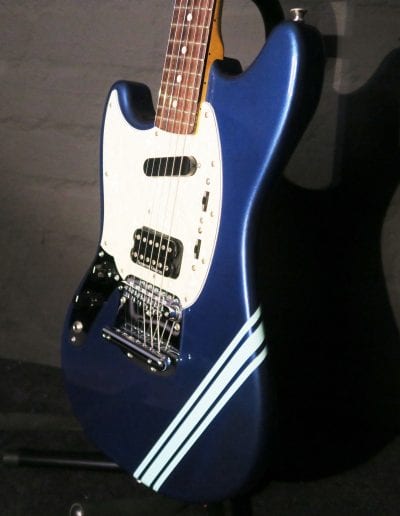 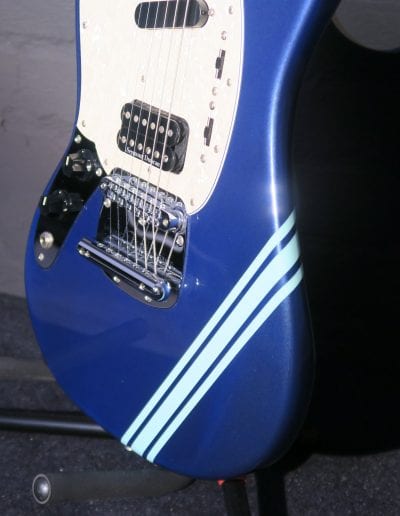 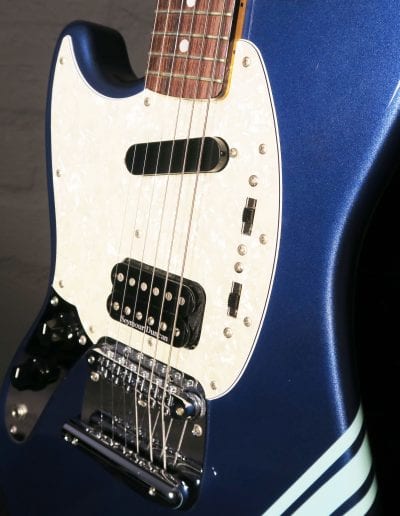 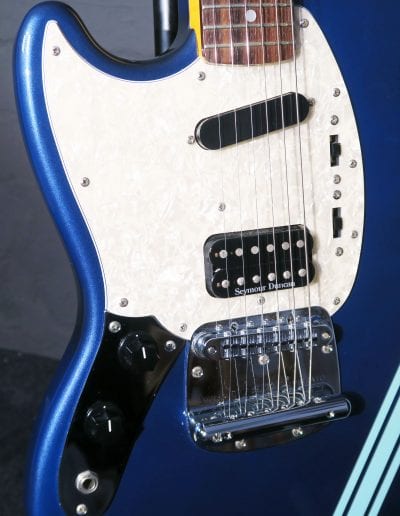 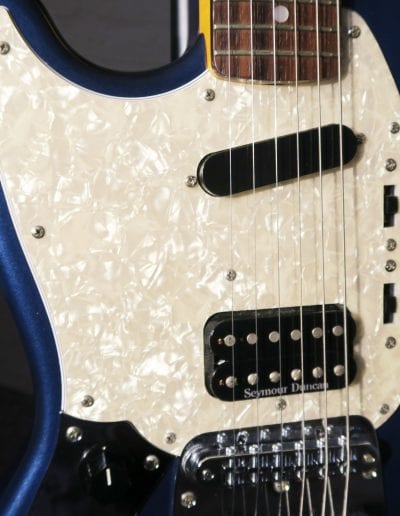 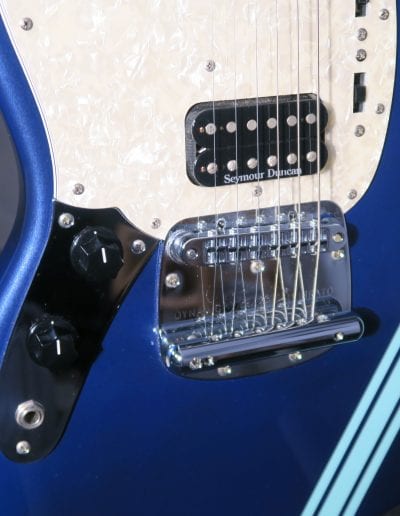 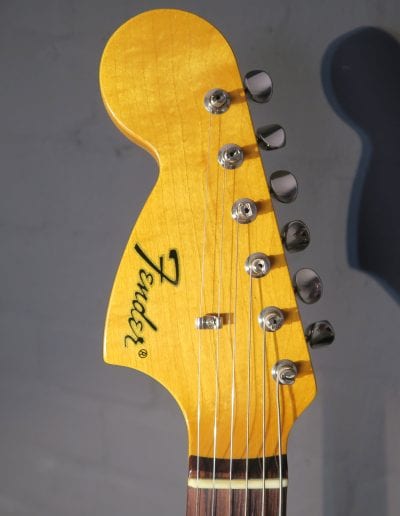 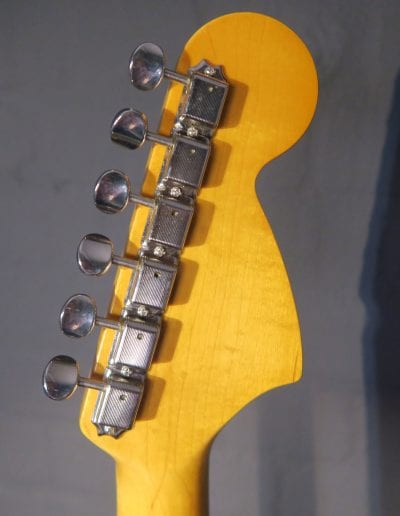 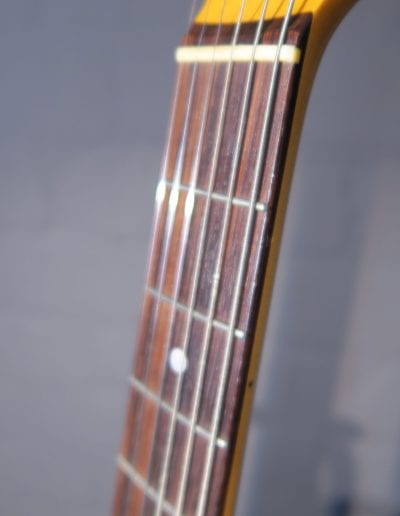 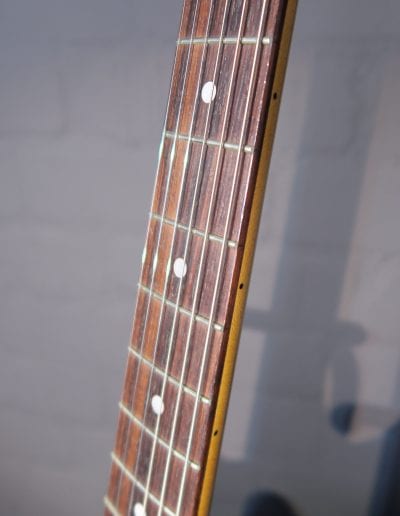 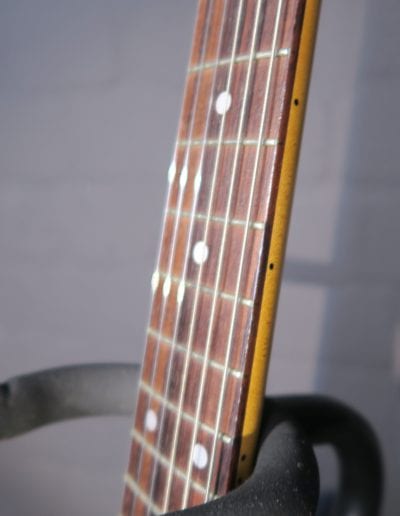 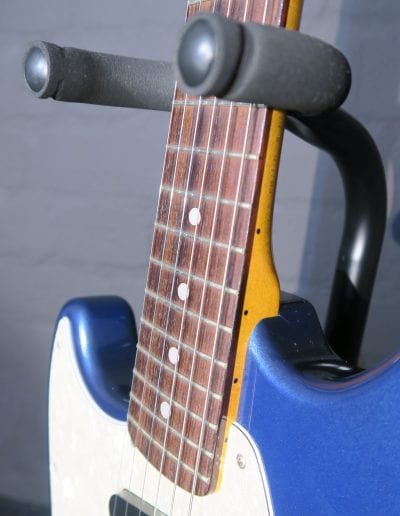 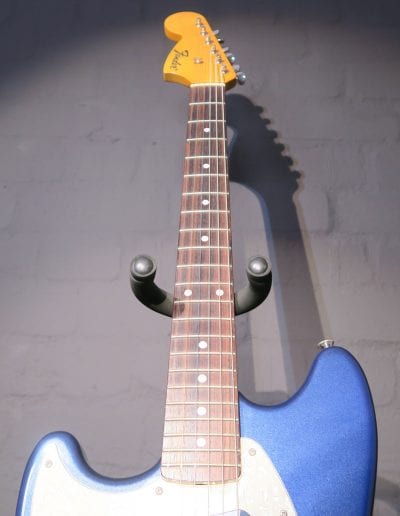 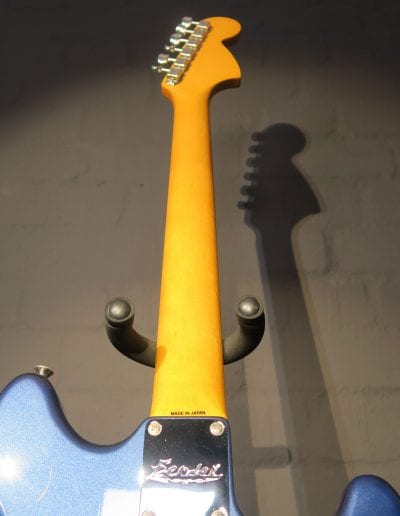 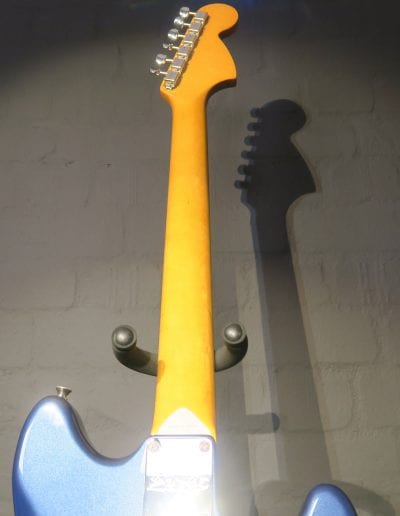 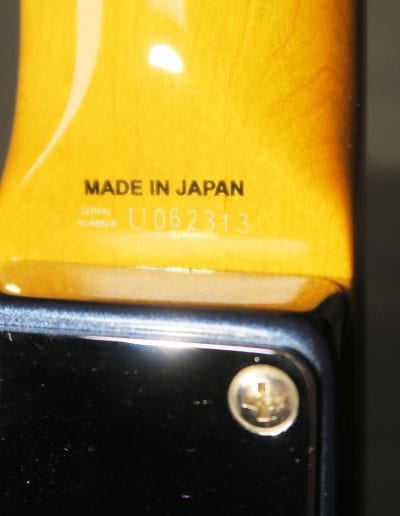 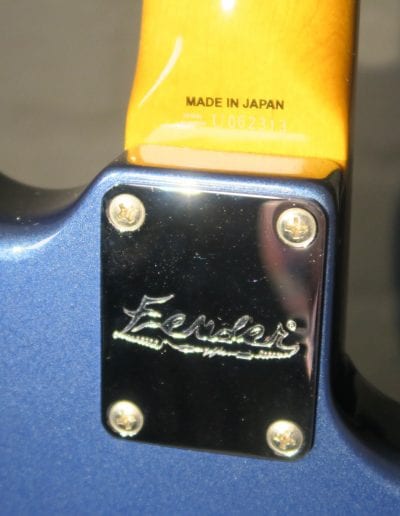 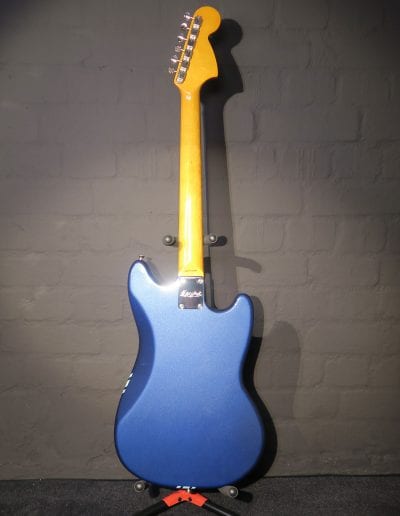 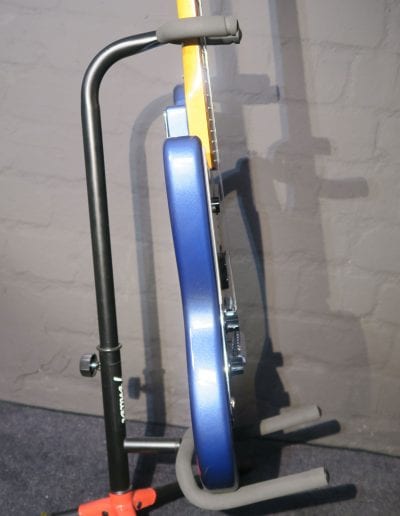 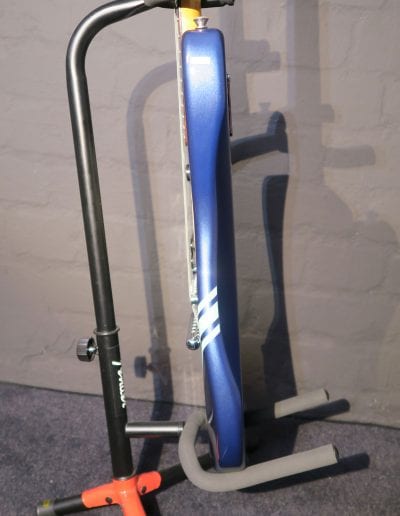 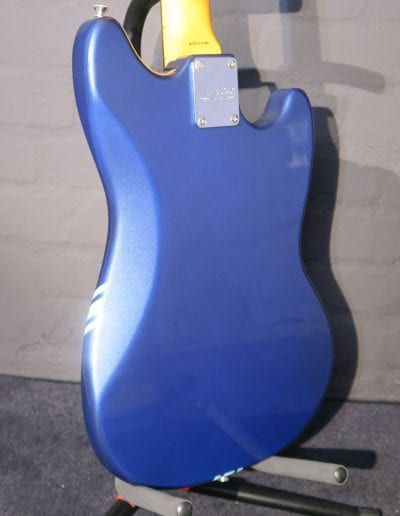 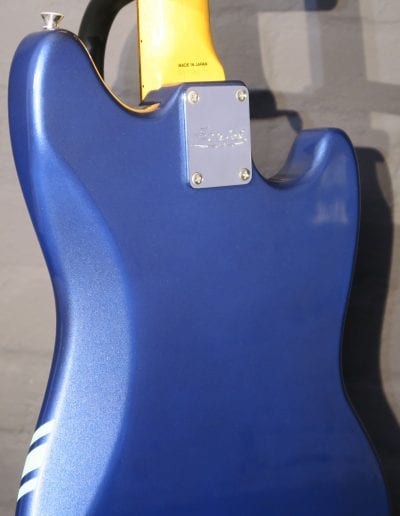 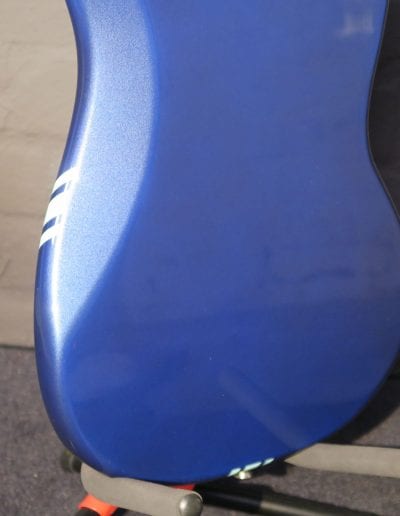 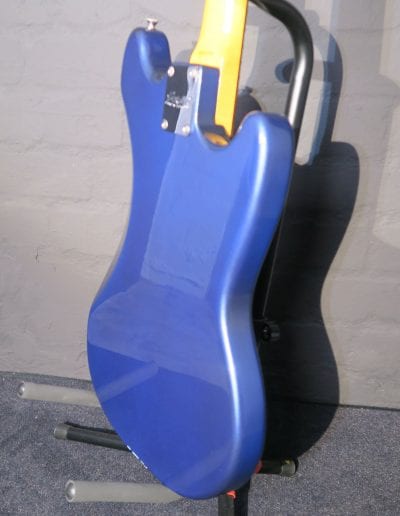 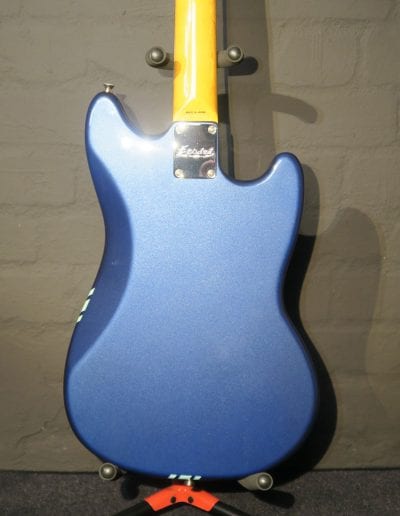 This Mustang It has been set up exactly to Kurt’s specifications and made for him in 1993 for the In Utero tours. Interestingly this Lake Placid Blue is the rarer of the three finishes and is based on Kurt’s favourite guitar his Vintage Lake Placid Blue Mustang mixed with the specification of the In Utero tour mustangs, with the added advantage of the far superior Seymour Duncan JB installed over the stock bridge pickup and the standard finished headstock. The guitar is a wonderful player and has a powerful sound for its size. The appoximate measurements of the guitar are as follows: The nut width is 41.3mm / 1.625″, the depth of the neck at the first fret is 21.24mm / 0.8365″ and 2.11mm / 0.949″ at the 12th fret. It has a C shape neck profile with a 7.25″ fretboard radius. The frets at 1.93mm / 0.076″ wide and 1.18mm / 0.046″ deep. The guitar weighs approximately 3.305KG.

This Fender Mustang guitar is in near mint condition with minimal play wear. There were fewer left handed Kurt Cobain Mustang’s produced and are very sought after by Nirvana fans and collectors alike, as well as for being excellent left handed guitars. The guitar is in great condition and has been well looked after. These are hands down the best Fender Mustang’s out there. They have Seymour Duncan JB’s in the bridge for a great fat, raw rock sound, and can be controlled by the sliding tone pick up switches that have been sunken down at Kurt’s request and is a great improvement on the originals which used to poke out and were easily hit when strumming. This guitar has been upgraded with a custom made neck pick up which gives the guitar in the neck position greater tone and clarity as the pole pieces are exposed. The original pick up is included if you did want to turn it back to original. The pick up that is installed is modelled after a Fender Texas Special close in sound to what Kurt Cobain had installed in his Jag Stang. The neck is great to hold nice and slim but not too narrow, just right. It’s just an awesome guitar to play and own and you can see why they were Kurt’s stage favourites that he almost exclusively played them from ’93 onwards. Kurt’s favourite guitar ever was his ’69 Lake Placid Blue Fender Mustang and this is a stunning tribute to it.

When Kurt Cobain hit the stage in the early 90’s, it was often with a Mustang electric guitar – he was an enigmatic anti-hero figure with an esoteric anti-hero instrument. So it’s with great pride that Fender introduces the Kurt Cobain Mustang, which evokes the man, the band, the sound and the times, and gives an authentically crafted nod to one of the most unlikely guitars to ever find itself at the center of a musical maelstrom.

The official Guitarsmith Merch store is here! With